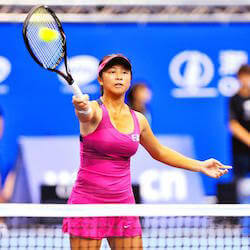 Monday 13 November sees the start of the OEC Taipei WTA Challenger, another tournament in a feast of women’s tennis that will keep online sports punters entertained during November. The Taipei event is another stop on the 2017 WTA 125K Series, played indoors in the Taiwanese capital on carpet courts.

The top seed will most likely will be current World No. 87 Aryna Sabalenka, presuming she got through her Fed Cup final on the weekend unscathed. The 19-year-old Belarus rising star was drafted into the national team to face the USA at home upon the loss of Victoria Azarenka. The former No. 1 ironically can’t leave California for Belarus, as she needs to remain in the state as a legal requirement in the custody battle with the father of her child.

As a result, Sabalenka, who won the Tianjin tournament in China and the Toyota tournament in Japan last year before finishing as runner-up in Shenzhen, China, in March this year, will step in. If she has a good Fed Cup, she’ll hit the Taipei Challenger in top form.

Russian Rodina Could Be Top Threat

Evgeniya Rodina looks set to be second seed in Taipei, and the biggest threat to Sabalenka. The Russian No. 80 will be eager to come back strong, after she got knocked out of the Hua Hin Championship in the Round of 16.

Given the starchy relationship between China and Taiwan, there will also be a lot of pressure on third seed Duan Yingying to excel in Taipei, along with her fifth-seeded countrywoman, Zhu Lin.

Fourth seed, between the two Chi9nese stars, is Japan’s Kurumi Nara, with Belgium’s Yanina Wickmayer, who also fell in the Round of 16 at Hua Hin, seeded sixth. Japajnh’s Risa Ozaki and Romania’s Ana Bogdan round out the top eight seeds for Taipei. It is likely to be a closely fought tournament, with one or two surprises.