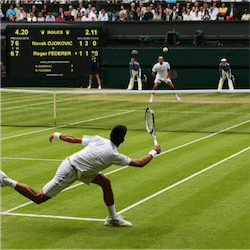 July brings sports lovers the traditional treat of the Wimbledon Grand Slam in England. The third of the four great annual tennis tournaments, Wimbledon starts just a month after the French Open, and finishes a month before the start of the US Open, so it’s peak season for New Zealand’s tennis betting fans.

Between the clay of Roland Garros and Wimbledon’s grass, however, most players want to acclimatise to the slicker surface. Traditionally, the top contenders for the Wimbledon Ladies’ Championships warm up in the grass-court Birmingham Classic, now sponsored as the Aegon Classic.

This year’s Classic has seen a strong return from Petra Kvitova, six months after her racquet hand was badly damaged in a knife attack. She had no trouble winning her first two rounds in the Aegon Classic. At the time of writing, Kvitova was about to meet France’s Kristina Mladenovic in the quarter-finals.

Whoever wins, both women will be contenders in the Ladies’ Singles at Wimbledon. But with defending champ Serena Williams still pregnant, top seeds Angelique Kerber, Simona Halep and Karolina Pliskova, among others, will be fighting 15th seed Kvitova and 11th seed Mladenovic hard for the title.

The Queen’s Club Championships in London, now the Aegon Championships, is the usual grass prep tournament for Wimbledon’s Men’s Championships. It has produced some spectacular upsets among the Wimbledon favourites in its opening rounds.

British World No. 1 Andy Murray, defending champion both at Aegon and Wimbledon and also top seed in both tournaments, was knocked out in the first round at Queen’s Club, as was fourth seed Milos Raonic. The Canadian is seeded sixth for the Wimbledon Men’s Singles. Switzerland’s Stan Wawrinka, second seed at Aegon and fifth for Wimbledon, also went down in Round 1.

However, Rafael Nadal, fresh from his record French Open title, isn’t even playing in the Aegon. Neither are Novak Djokovic and Roger Federer; and Djokovic, Nadal and Federer are respectively the second, third and fourth seeds at Wimbledon. Whoever wins the Aegon Championships, these three legends will be a serious threat.

Croat Marin Cilic is seeded seventh for The Championships, and at the time of writing was the top seed left in the Aegon quarter-finals. There is obviously no shortage of talent at Wimbledon this year, and fans are liable to see some sensational tennis. Sportsbet is offering great odds on all the games, and if you want to get in early, now is your chance.