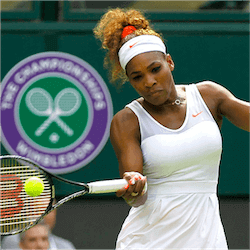 If there is one thing we have learned from Wimbledon this year is that you can never underestimate the power of a home crowd and the ability for low-ranked players to suddenly up their game and play as if they have always been at the top. With the woman’s quarterfinals done and dusted, we can now focus on the four women who have a clear shot at the title. If you want a bit of a punt and you are keen to make a bit of money before the day of the final, betting early is the way to go. Here is how each player stacks up.

There is a reason why the bookies have made Muguruza the odds-on favourite. If you managed to catch the match between Muguruza and top seeded Angelique Kerber, you will understand why the bets all favour her to win. Her power and precision on court is phenomenal and she has just come off the back of a French Open win. While she may not have won Wimbledon before, she certainly has what it takes and handles pressure well.

Since she made it into the quarterfinals, Konta has been extremely focused and a force to be reckoned with. Not many people picked her to win over Simone Halep but she managed to defy the odds and get the home crowd behind her. After slogging it out for 3 long sets, Konta prevailed, becoming the first British woman to reach a Wimbledon semi-final since 1978. She handles pressure extremely well and there is no telling what she can do with the crowd behind her.

While she may not have the lowest odds, Venus Williams is the only player out of the four left that have actually won a Wimbledon title. This takes the pressure off and gives her the confidence to play and win a final when the real pressure sets in. A semi-finalist last year, Venus was runner up in the Australian open at the start of the year and has been playing impressive tennis all season.

Like Konta and Muguruza, Rybarikova has never won a Wimbledon final before. This doesn’t mean she doesn’t have a good shot at the title. At odds of 7.00 Rybarikova is the underdog mainly because of her ranking, which is sitting at 67. She is definitely the least experienced of the bunch but dispatched Coco Vandeweghe in straight sets, a feat most players will struggle with. Her finesse and speed on court is a pleasure to watch, but she lacks the power of Venus and Konta.