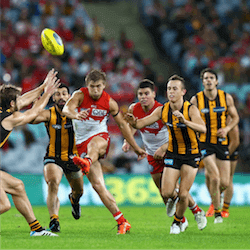 Getting Set for the AFL Quarter Finals Week 1

We are finally heading into the last phase of the AFL season and you can get your bets in online at Crownbet on the following upcoming games.

Thursday the 7th of September sees the first game of the AFL finals being played. The move to shift the game to a Thursday time slot rather than the traditional Sunday match day was met with some resistance from fans, but it is the best way for the league to maximise match attendance and to build more excitement.

The Adelaide Oval is the chosen venue for the Crows v Giants clash and the match will start at 7:50pm. It is no surprise to anyone that these two teams have made it to the finals. The Crows are ranked no 1 and the Giants are in at number 4.

While the Crows will be playing with a home ground advantage, they will be coming of 2 straight losses which may not sit well with the team’s psych. Whether the Crows have simply lost focus or if the side is run down we don’t know but whatever is the case, they will need to find their mid season form again because the Giants will be out for blood.

Friday night sees the Cats meet the Tigers at the MCG. The Cats already have a proven record against the Tigers and entering this match, the Cats have a 3 win momentum behind them, not to mention the home ground advantage

Richmond themselves come off two manhandling sessions where they easily dispatches Fremantle and St Kilda. With their form this year, this could mean a finals finish for Richmond who probably are already tasting the glory. If they stay hungry this match may be theirs.

No team has gone through the highs and lows that Essendon has this season and due to their late blooming this season, they simply do not have what it takes to take out the Swans.

Taking place on Saturday at the SCG at 420pm, this match should go in favour of the favourites for the finals, the Swans.

This match is also set for Saturday at the Adelaide Oval and is the most interesting matches of the qualifying finals. West Coast has been too inconsistent this season to be a solid bet.

Their most consistent form was for 3 games in round 6, 7 and 8. The rub is, the team they won against was Port Adelaide when they faced each other at the Adelaide Oval. Weather this night will be history repeating itself remains to be seen.