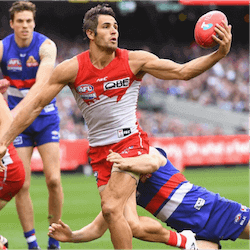 Let’s take a look at this week’s AFL action as we enter round 23.

With better stats this season in defence and scoring, the Hawks have a marginal advantage on paper.

This will also be the Hawks’ Luke Hodge’s final game, giving the Hawks even more incentive to do their best.

Seeing the powerful forward attack of the Crows crash against the rock solid backline of the Eagles will be something indeed.

Adelaide is the favourite here with this match being all the more poignant as it is the last AFL match to be played at the much-loved Domain Stadium.

Sydney will steam roll Carlton in this game.

The Swans have only conceded an average of 66 points per game this season and they have a near undefeated record against Carlton.

The Lions can take this game, as it is clear their scoring has improved since the start of the season.

This match however comes down to who is the most willing to fight and avoid last place.

The Suns on the other hand faced their 7th straight defeat. The Power have it.

Melbourne has a narrow edge in this game. The Magpies have nothing to lose and last week made Geelong work for their win despite their decimated ranks.

The Demons have to attack Melbourne’s mid to stand a chance.

The match of the weekend, it will be a very close call slightly in favour of GWS. They have come off 4 wins in a row and are in great form.

It will be an in-close game and the Giants will need to focus on winning the rucks, a strength of theirs.

The Tigers are still one of the most defensive teams this year, 2nd last in points conceded this season.

St Kilda has won the teams last two encounters but they have really lost allot of steam this season and their current form cannot hold up against Richmond’s charge.

The combination of the high stakes of this match and the poor form of Fremantle gives Essendon a big edge to come out on top in this rather uneven match.

If you want to bet on these, or any other AFL matches, head on over to Sportsbet, they offer great odds and markets.