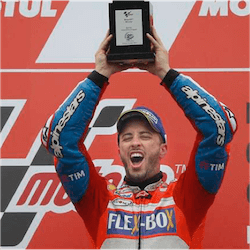 Ducati rider Andrea Dovizioso has closed the gap on MotoGP points leader Marc Marquez after he finished just 0.249 seconds ahead at the Japanese MotoGP in Motegi. On a rain soaked track, Dovizioso snatched the lead on the final lap, giving him his fifth victory of the season and bringing the point gap to just 11 points. With three races remaining in the season and anything can happen.

While the race was filled with thrills and spills from all across the board, the main race evolved into an epic battle between the top two placed riders. In fact, it looked to be an exact reprise of the heart-stopping Red Bull Ring battle earlier in the year where Dovizioso came out ahead. At the Japanese MotoGp, it was Marques that looked to be in control from most of the race. This was until he hit a major wobbled on the final lap. This gave Dovizioso the chance to close the gap and pass the Honda on Turn 11.

Battle at the Front

In a repeat of what happened in Austria, Marquez made a bid to hit back on the final corner but ran out wide, giving Dovizioso the 0.249 second lead he needed to win the race. Earlier in the race it was Pramac Ducati rider Danilo Petrucci who took the lead. In fact, Petrucci held a commanding lead as high as 1.9 seconds thanks to bike’s extra soft back tire. His long spell at the front eventually ended as he was reeled in and passed by Marquez and then Dovizioso on lap 13 and lap 14.

With Petrucci falling further and further back, it really became a two-horse race. The gap between first and second hovered around 0.5 seconds until Dovizioso made his first attack on lap 19. Taking the lead on turn 5, the Ducati led by eight tenths of a second but was quickly passed again by Marquez with just three laps to go. The pair traded places at the front again with Dovizioso making a move on turn 6. Three turns later, he lost the advantage and Marquez pulled away, seemingly heading for a clear win.

The error on the final lap gave Dovizioso the chance to catch up again and ultimately pass the Honda to seal the win. The two were so far clear of the pack that Petrucci clocked in at third a full 10 seconds later. Andrea Iannone and Alex Rins came in fourth and fifth after passing with the Suzuki pair passing Johann Zarco on the Tech 3 Honda late in the race.