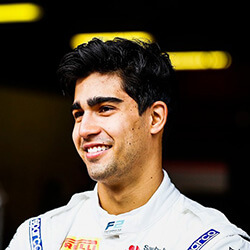 Formula 2 driver Juan Manuel Correa has spoken publicly for the first time since he suffered a severe injury in the crash that took Anthoine Hubert’s life. The 20 year old was forced to undergo a 17-hour surgery to deal with the many injuries that he suffered in the famous collision. The Ecuadorian-American stated that the aftermath had been tougher than anything that he had ever faced, both mentally and physically.

He will now be facing up to an entire year of rehabilitation as he recovers from his two broken legs as well as spinal injuries. The statement he released by doctors said that they don’t expect that Juan Manuel will be able to leave the hospital for another six weeks. They added that he will be then be embarking on the road to recovery, and that his next year will be full of physical therapy, corrective surgeries, and rehabilitation. The aim is to allow the driver to regain the full use of his right ankle and foot.

The injuries were all sustained during the accident that killed Hubert at the Belgian Grand Prix in August. 22-year-old Hubert had suffered an impact from Correa’s car at the Spa-Francochamps circuit. Shortly after the collision, Correa was placed into a medically induced coma, and was diagnosed with acute respiratory distress syndrome. But after showing signs of improvement, doctors focussed on saving his right leg, which allowed experts to determine the severity of the damage.