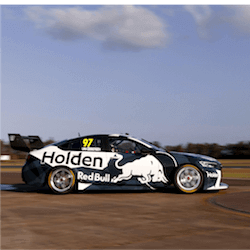 The upcoming Virgin Australia Supercars Championship kicks off on the 1st of March, much to the delight of many punters and racing enthusiasts. Last week, the Red Bull Holden Racing team unveiled their new paint scheme for the upcoming season, which will be flaunted in all its colourful glory by defending champ Jamie Whincup along with New Zealand favourite Shane van Gisbergen as they compete in the 2018 championship.

Against the backdrop of the Sydney opera house, Red Bull’s new livery was revealed on a beautiful Sydney afternoon where the cameras could pick up all the nuances of colour and bold statements that epitomise the team’s future endeavours for 2018. Taking a departure from their usual corporate colour scheme, the press was instead greeted with a prominent amount of white paint mixed in with the familiar blue of Red Bull.

It has to be said that the livery bears a striking resemblance to the colour scheme used by Volkswagen in 2016 during the World Rally Championship. It would make sense though as Red Bull were there sponsors at the time. Despite the fact that the season kicks off in less just over a month, this is only the third livery to be released so far. In recent weeks both 23Red Racing and Preston Hire Racing unveiled their war paint.

That being said, this was the first time that punters were actually able to view the new and improved Holden ZB Commodore Supercar with or without the paint. The car will also be the first entry into the series since the more popular VF Commodore Supercar replaced it after production shut down last year.

What makes this car stand out is the fact that it is the first hatchback to be raced by Holden at a top-level series since the 1970’s when they competed with the Holden Torana A9x. Racing fans will have fond memories of the A9x as the car driven by Peter Brock and Jim Richards when they won the Bathurst 1000 in 1979.

The Holden is not without controversy though. Since revealing that it would be powered by twin-turbo V6 engine, the racing community have had a few words to say about it. While the changeover from the V8 unit is still slow at best, it is expected that teams will be adopting the V6 unit by the start of the 2019 season.