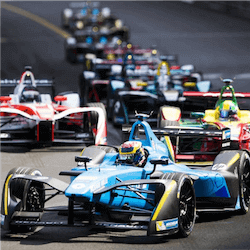 What with the latest Formula E season having kicked off for the year as well as all of the excitement of Mexico City, there is once again a renewed wave of interest observed in the finer workings of the technology that is employed in Formula E racing. We have put together a crash-course, or quick fix if you will, outlining the broader scope of Formula E and how it slots into the bigger motorsports picture for 2018.

No Longer Viewed As A Knock-Off

For the longest time, Formula E was viewed as being the not-so-favourite child of Formula 1, even described by some as Formula-Lite. The general feeling was this: its green so it must be terribly boring. Lately, however, Formula E is challenging the age-old rituals and offering a more responsible alternative, without boring anyone to death.

Besides the renewing effect that it has had on the way we view Formula 1 and what we deem to be exciting and not-so-exciting, it has also been acting as a moral compass in the world of competitive motor-racing. Not everyone has made the replacement of the grid girls with grid kids connection, but Formula E was responsible for the initial decision, after which Formula 1 followed suit at the end of last year.

Birth Of The Second-Generation Supercar

After a total of 36 races spanning four years, Formula E has finally unveiled the highly anticipated Gen2 Car. The all-new electric supercar will not feature in any of the current season’s races but has the motor-racing tongues wagging in a big way. The newest addition to the Formula E family will be making its debut race in 2019, and will in effect enable drivers to finish a complete race without having to make a car-swop half-way through due to the limited energy storage capacity.

Gen2 then, is a powerful example of the progress that has been made in the fields of battery energy storage and electric motor technology. More impressively, the leaps and bounds in progress that has been made in the way of the general tech powering electric cars, has been achieved in a question of four years. Technology that will soon be implemented successfully in everyday-use road cars. Electric road cars, no less.

Starting in Hong Kong, this year’s Formula E championship went on to Morocco, then Chilli, then Mexico, and is fast becoming an all-time hit on the motor-racing calendar.