The Wheels Of Change Are Turning For Toro Rosso 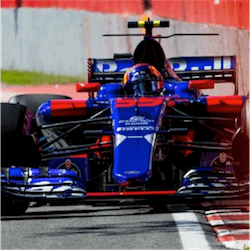 The  Red Bull-owned Toro Rosso Formula 1 team is once again stuck in the spokes of the wheels of uncertainty as it heads for yet another driver change with the upcoming US Grand Prix looming on the horizon.  This time it’s all thanks to French driver Pierre Gasly.  Gasly, the 2016 GP2 champion, was selected to replace Daniil Kvyat to race for Toro Rosso in the Malaysian Grand Prix – Gasly’s very first F1 Grand Prix race.  He also went on to compete in last weekend’s Japanese Grand Prix alongside Carlos Sainz, and hasn’t failed to impress the powers that be at Toro Rosso.

Sainz also recently announced that he would be racing for Renault next season, effectively leaving the gap wide open for Kvyat to make his return.  The other side of the coin is that Gasly very well miss the F1 US Grand Prix as a result of competing in the Japanese Super Formula Series in Suzuka.

Gasly has indicated that he would prefer to stay with Toro Rosso instead, but Red Bull’s Helmut Marko has been making suggestions to the contrary, saying that the Japanese battle of the brands would most probably be enjoying priority.

In the event that Gasly is tied up elsewhere, Toro Rosso will be left hanging once more.  The options are limited due to drivers with the necessary super licence being in very short supply.  The drivers who are available have completely fallen out of Formula 1 racing.  One of these is Sebastien Buemi.  Buemi last competed in Formula 1 back in 2011.  He did go on to win the Formula E electric title since then, but it’s still a long shot in the dark.

The firm favourite seems to be none other than New Zealander Brendon Hartley.  Hartley is, after all, this year’s Le Mans winner (in a Porche) and has accumulated enough points to qualify for a super licence.   The challenge is that Hartley too, has never raced in a Formula 1 race and isn’t accustomed to racing the newer generation turbo hybrid engines.  He would certainly have his work cut out for him if he were chosen to be Toro Rosso’s newest golden boy.

At this stage Hartley seems  the be the strongest contender for the job.  A spokesperson for Toro Rosso has been unable to provide clear answers to the questions posed by the press.