McLaughlin to Challenge in Auckland

McLaughlin Keen to Bounce Back in Auckland 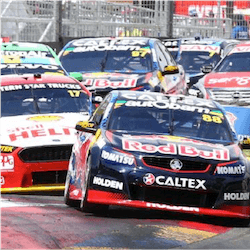 There are just four races left in the 2017 Virgin Supercars Championship, and five drivers still in with a theoretical shot at the title. As a result, motorsport betting fans have some exciting options in the two races at the Auckland SuperSprint on Saturday 4 and Sunday 5 November.

One-time tournament leader and favourite in the outright futures odds Scott McLaughlin has slumped to third on the drivers’ ladder, after a disastrous 21st in Sydney and an engine failure that put him out of the Bathurst 1000.

However, his 12th and first at Surfers Paradise Street Circuit in the Gold Coast 600 on 21-22 October put the DJR Team Penske driver back in contention on 2,553 points, behind teammate and countryman Fabian Coulthard, and Triple Eight Racing driver Jamie Whincup.

Racing on North Island for the Auckland SuperSprint at Pukekohe Park Raceway, barely 100km away from his home in Hamilton, McLaughlin will be boosted by home-crowd support, and he’s promised fans an aggressive challenge for the top spot. British-born Kiwi Coulthard can also expect strong home support.

Whincup, now on 2,580 points to Coulthard’s 2,563, only took the lead on the ladder with his second place in Race 2 at Surfers Paradise, after finishing sixth the day before. Coulthard finished ninth on Day 2 and 19th on Day 1, allowing Whincup finally to overcome the setback he dealt himself with his senseless late crash in Bathhurst and slip into the championship lead.

Whincup and McLaughlin are joint favourites both to win in Auckland, and in the outright futures to take the drivers’ championship. For the SuperSprint, online sports betting sites are offering them at $4.50, and they’re each at $1.50 to win the championship outright.

Coulthard his still a danger man, although he’s ranked fifth in the SuperSprint betting at $10.00. He’s nevertheless the $2.50 next-best behind McLaughlin and Whincup in the outright betting.

Rod Nash Racing driver Chaz Mostert is lying fourth in the championship on 2,454 points, thanks to his first and seventh in the Gold Coast 600. Whincup’s Triple Eight teammate and another New Zealander, Shane Van Gisbergen, is fifth on 2,391. Both are within 200 points of the lead, so Mostert at $8.00 and Van Gisbergen at $5.00 both have potential in Auckland. They’re at $50.00 and $100.00, respectively, in outrights.