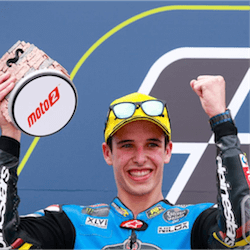 Alex Marquez managed to pull off this third Moto2 victory with a convincing win at Motegi in Japan. Meanwhile VDS teammate Franco Morbidelli extended his championship points lead despite finishing in a disappointing eighth position. Due to the severe wet conditions, the race was shortened to just 15 laps, which did nothing to dampen the excitement on track.

Starting from pole position, local hero Takaaki Nakagami got out to an early lead that he held for most of the race. He ran just ahead of Xavi Vierge and Mattia Pasini who followed hot on his heels. Marquez was in second for a brief time before dropping to fourth inside the opening lap. He soon found his rhythm though and was back up behind Nakagami and looking for an opening.

Nakagami managed to keep Marquez at a good distance until the halfway mark. It was around this time that Marquez started closing gap and planning his attacks. The Japanese rider was able to hold Marquez back on his first attack on lap nine. Two laps later, Marquez attacked again, this time finding success on the turn. From there, the Spaniard was able to drop the remaining laps without any challenge. This was his first Moto2 win since his victory in Barcelona earlier in the year. It is also his eighth Grand Prix win of his career.

Nakagami Unable to Stave off Attack

Having been taken by Markquez, Nakagami began to fade and was eventually passed by Tech 3 rider Vierge. With less than four laps remaining, Nakagami was demoted again, this time by Hafizh Syahrin. With the pace behind him, Syahrin looked as if he could challenge Marquez for the lead but just could not find his way around Vierge who claimed his first ever podium second placing

The woes of Nakagami continued as he was passed on the final lap by Francesco Bagnaia and Pasino who placed fourth and fifth respectively. Starting off from 15th on the Grid, points leader, Morbidelli did well to finish in eighth, just one place behind Miguel Olivera and a full 11 seconds behind Marquez at the finish. Morbidelli’s nearest points rival, Thomas Luthi managed to come home in 11th, meaning that Morbidelli will carry a 24-point lead into the final three races of the Moto2 season.