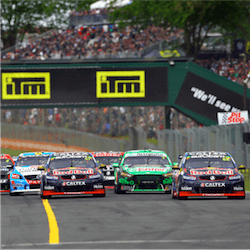 Jack Perkins will the man replacing youngster Alex Rullo for his first Supercars start since 2015. This comes after Rullo and Lucas Dumbrell Motorsport officially parted ways in the lead up to the ITM Auckland SuperSprint. According to reports, LDM informed the 17-year-old that there is no room for him in their future plans. As it stands, LDM are looking to link in with Prodrive and investment from Phil Munday.

The parting of ways was officially signed and sealed over a LDM crew dinner with Rullo’s father/manager Peter handling the situation. Speaking to the press, Alex said he is actually pretty chilled about it all. He admitted that it was shock at first but he is confident that in the right car he will be pretty competitive no matter what series he is in.

Meanwhile Peter Rullo has confirmed that he is currently in talks with multiple teams to keep his son in the Virgin Australia Supercars Championship. While he started the season amid controversy over his age, Rullo has been well prepared for whatever lies ahead. While he won’t be making an appearance at Pukekohe this weekend, Rullo will be back at Newcastle looking to take on a role in a support category.

Perkins To Make His First Solo Start Since 2015

Now that Rullo is out, it presents a bit of a challenge for the LDM team. Since Rullo was perhaps the only driver to constantly race at LDM, some tough decisions had to be made. The result is that Rullo’s replacement this weekend will be none other than HSV Racing co-driver Jack Perkins. He will be standing in for the injured Nick Percat, which we would assume, would be LDM’s first choice. Jack Perkins made his last solo start at the end of 2015 and will have a lot to prove. That being said, he comes into the race of with plenty of miles having completed three long-distance races seated next to James Courtney.

According to LDM team owner, the team is happy to have Jack on Board. A long-time friend, Perkins is seen as a reliable backup having filled for LDM before. The LDM team will also have Aaren Russell behind the wheel of the Commodore. Perkins will be the sixth driver to drive a solo round for LDM this year. He joins an elite group, which include Alex Davison, Matt Brabham Taz Douglas, Alex Rullo, and Cameron McConville.