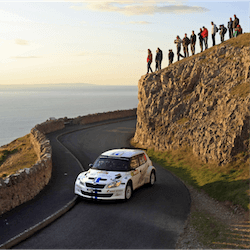 The 2017 World Rally Championship is heading to Britain for another round of mud, action and drama. The Penultimate round of the Championship is none other than the Dayinsure Wales Rally, which kicks off on the 26th of October and runs to the 29th. First run in 1932, the Wales Rally is one of the oldest on the calendar and features a great selection of gravel stages with tree-lined forests and rugged terrain. The unpredictable autumn weather in Wales is also going to make it one of the most demanding stages of the championship.

This year, the itinerary will be focused mainly around North and central regions of Wales. The service park will be hosted by Deeside again, just a stone’s throw away from Toyota’s engine manufacturing plant. The Dyinsure Rally kicks off on Thursday night with a brief opening stage at the Tir Prince horse trotting track.

Friday will see the crews heading the furthest south to the Aberystwyth and Llanidloes areas of the country. Here they will compete in the Myherin, Sweet Lam and Hafren stages of the Rally. Each stage is driven twice on either side of the tyre and light fitting zone in Newtown. The crews will be well aware that there will be no service here until the start of the evening.

Saturday sees the crews take on an epic 17-hour marathon over nine stages. This will test the crew’s endurance to its absolute maximum. Centred around the Snowdonia region, the stage kicks off with Aberhirnant, one of the fastest and certainly one of the most spectacular stages. This will be followed by the world-famous Dyfnant stage. The crews will then navigate their way through the Gartheiniog and Dyfi stages twice before heading to the Cholmondeley Castle test just across the border in England.

After a brief service interlude, the teams head out again for another pass through the now familiar Dyfnant and Aberhirnant. This time, they will have to negotiate it in the dark, making things a little trickier. Sunday’s finale will be based in the north of wales near the Alwen and Brenig reservoirs. The crews will run through the three stages with Alwen first, then Brenig, then Gwydyr before pulling in for a quick refuel.

After the refuel, the Alwen and Brenig stage are repeated with the Brenig stage as a TV Power with epic views along the reservoir. By the end of the Dayinsure Wales Rally, the crews would have completed 21 special stages and covered a distance of 304.36 kilometres. You can bet on all the action online too, just sign up at Crownbet and place your wagers.