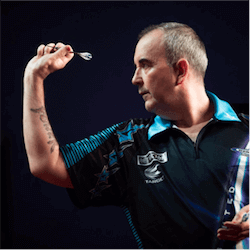 It’s become a regular instalment at Christmas, so much so that Christmas would no longer be Christmas without the William Hill World Darts Championships, and it’s all happening come December 14th.

The usual cast of players will be making their return to compete in this year’s championships, including two-time world champions Adrian Lewis and Gary Anderson.  Both men will be chasing the big number 3.

There are also those chasing their maiden world crown title win.  Daryl Gurney, Mensur Suljovic, James Wade and Peter Wright will all be going for gold for the very first time this year.  There are also freshmen who will be hoping for a podium finish, most notably Rob Cross.

This year, all eyes will be on Phil “The Power” Taylor as he makes what is expected to be his very last appearance at the World Dart Championships.  It has been a highly emotional journey for 57 year old Taylor with the final championships appearance expected to be no different.

Taylor is a 16-time world champion and will no doubt be looking to finish strong in what he has described as a fairytale finale.

Coverage of the event will be managed by Sky Sports and the broadcaster’s Sky Sports Darts programme management has undertaken to broadcast all of the games, starting December 14th.  The competition will run from December 14th up until new years’ day 2018; 15 days of non-stop darting action.

Highlights of all 22 games sessions will also be broadcast on Sky Sports.

Despite Phil Taylor’s dandiest efforts to create a finale worthy of reflecting his sterling career, Michael Van Gerwen will in all likelihood walk away the ultimate victor once more.

The World Number 1 remains the favourite to be hoisting the Sid Waddell trophy for the 2017/2018 World Championships. If Van Gerwen does win, and it is widely expected that he will, this will have been his 3rd World Championships trophy win.