Albert Vete Soon To Be Off Contract in NRL 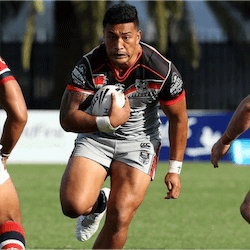 NRL – Albert Vete is Playing a Future with the Warriors

Albert Vete, the dynamic Warriors prop is playing for a NRL contract and a future with the New Zealand Warriors. While he may be off contact at the end of the season, Vete is currently in negotiations with the Warriors about extending his time with the franchise. There seems to be no imminent deal on the cards just yet, but Vete is not letting the matter affect his game.

Speaking to the press, Vete said that he is still in talks with his manager about what the best option would be; whether it is staying in the side or playing overseas. His main focus at the moment is to stay in the starting 17 and to make it difficult for the selectors for them to take him out. Vete has admitted that his preference is to stay with the team but he understands that he needs to put in a strong performance if he wants the club to offer him a new deal.

A Chance to Focus on The Game

Starting off the season well, Vette was demoted to the ISP side after hitting a form slump. He told the press that it was a bit wake up call for him, not being comfortable in the position he was put in. He admitted that he didn’t play to the potential he had shown in previous games. When he got the call up to get back into first grade footy, Vete has excited about the prospect of putting in some good performances.

He has been back in first grade for a few weeks now earning a spot on the Warriors bench. He has displayed good form with the entire bench having a good run with a win over the Bulldogs and the Titans. Vese will face a touch test this weekend when the take on Manley in Perth. It will also be a good opportunity to give the selectors something to think about.