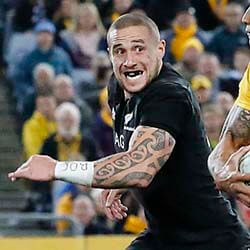 TJ Perenara had been playing around with the idea of switching to NRL with the Sydney Roosters earlier this year before announcing his return to the All Blacks. While Ian Foster is thrilled to have him back in the team, he is not impressed with how the player’s decision was publicised during this time.

Perenara was not allowed to play for the first three tests of the year as a result of contractual obligations. However, on Monday, he was named as part of the All-Blacks team set to compete in the Rugby Championship. He had previously been playing for Japan and turned down an offer to play in the NRL for the Roosters.

Fosters has told reporters that he is not happy about how things played out and how widely publicized it all was. He assumes it was part of the negotiation tactics but is happy to have him back on the squad. He is impressed with how played for the NTT Red Hurricanes, although he does think more training is needed before their first game on 7 August. He adds that he thinks Perenara is a good defender, confrontational nine, ultra-competitive and good over the ball.

Since his return from Japan, Perenara has been playing club rugby for Porirua. Foster hopes that he will also have a chance to play for Wellington in an attempt to get him up to speed. This has indirectly hinted at him not playing against the Wallabies next month.