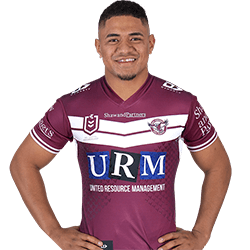 The NRL will soon receive a formal request to officially reconsider the suspension handed down to Sea Eagles star hooker Manase Fainu. The Manly star stands accused of having stabbed someone at a Wattle Grove-based Mormon church dance back in 2019.

Police investigating the matter will however now have to re-consider Fainu’s role in the incident – this after two witnesses recently came forward indicating the player to be innocent of the crime. Police will furthermore now consider one of their own witnesses to be the man actually responsible for the stabbing – this after the man in question initially confessed to the crime before backpedalling on his statement.

Fainu has since being first charged with the crime vehemently denied any involvement. His trial, which was scheduled to be heard in July this year, was postponed for a period of 12 months due to the knock-on effect of the global health crisis. The star hooker’s bail conditions were on Monday amended in such a way that he will only be expected to check in with law enforcement authorities three times a week – instead of daily.

According to attorney Paul McGirr, the victim of the stabbing isn’t able to say precisely what happened during the alleged incident. This leaves it up to two other witnesses who have not yet been interviewed by police, explained McGirr, who says he’s 100% sure of the NRL star’s innocence.

Fainu’s manager, Mario Tartak, has now urged the NRL to re-consider the star’s right to play given the new info that recently came to light.