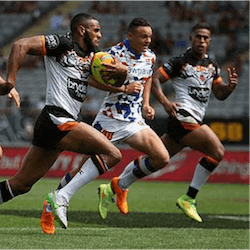 Saturday and Sunday brought the Auckland Nines competition to New Zealand’s rugby league punters for the fourth year in a row. As a fairly new competition, every year brings a new set of firsts for the record books, and this year was no exception.

Australian fans must have been excited to see their NRL Women’s team, the Australian Jillaroos, in their three-match clash against the Kiwi Ferns. Women’s rugby league was added to the competition in 2015, and the Ferns have won the series 2-1 two years on the trot. This year, however, the Jillaroos denied us the hat-trick, winning the women’s series with a three-game whitewash.

With Auckland’s New Zealand Warriors the sole Kiwi club side facing off against 15 Australian teams, however, the bulk of betting fans’ attention was focused on the men’s tournament. The Warriors, who finished runners-up to the Parramatta Eels in the final last year, went into the 2017 Auckland Nines as the tournament favourites.

Before the 2017 tournament began, bookmakers seemed sure that the Warriors, at $4.50, would make it to the semis, at least. The teams expected to join them were the North Queensland Cowboys, the Eels and the Gold Coast Titans, all priced at $10.00 or less. However, it was a year to bet on the outsiders.

The final was a closely fought game between two well-matched teams, with the Roosters eventually sealing a 10-8 victory over the Panthers. With bookies offering $21 on both Sydney sides for a tournament win, the Roosters’ first championship title in the Auckland Nines must have pleased those who bet on them no end.