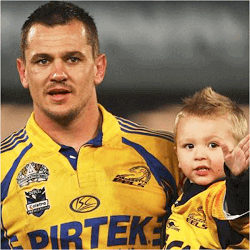 The much-loved NRL player Chris Robinson was found in the wreckage of his Subaru at the bottom of a cliff in northern Sydney.

He was 36 years old and a father of two. He had a successful run with both the Parramatta Eels and the Sydney Roosters before he was discovered late December. His family and friends dreaded the news but did expect it to some degree.

His family is too distraught to speak to news outlets and they are trying to cope with the huge loss at one of the most important times of the year.

Despite wide spread police and media appeals showing the NRL star and the vehicle he was driving in, no leads came in for 3 weeks since he was declared missing.

From the current investigation it seems he left Marieba Road in Kent Hurst and somehow clipped a hilltop and tumbled down a cliff face. He was eventually discovered by electrical workers 13 kilometres from his home in Crestview.

The appeals for information on his whereabouts included an emotional appearance by his sister, Monique Brennan. The family had been searching his favourite local haunts including bush trails and landscape features he enjoyed frequenting.

The Facebook page that was started to help simplify providing information on the footballer’s whereabouts announced that his body had been recovered. The page titled Let’s Find Chad had seen frequent outpourings of support and sadness. It was also where a touching tribute to his life and legacy was posted by friends and family.

The loss is of course equally hard on the two children Chad has left behind. The family thanked the fans for their unending support and assistance. His sitter posted that her brother is now free to fly high even though the people he leaves behind will miss him terribly.

Robinson retired from professional football in 2009 after a 9 year run with top local clubs. It is said that his split from his wife recently had left him upset and troubled.

He took part in the Parramatta Old Boys as an attempt by his friends to lift his spirits but unfortunately it did not seem enough to save the star.