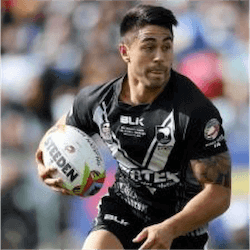 The New Zealand Warriors’ NRL season has once again got off to a shaky start, and, once again, calls for Shaun Johnson’s head are mounting. This is not the first time the Auckland-based club has been told that dropping Johnson will improve the team’s performance.

It is true that the halfback has played erratic games, and that the Warriors have lost three of the four games they have played so far, but the reality is that Johnson was named the teams’ record point-scorer. If Coach Stephen Kearney were to drop Johnson, the move would ultimately be to the team’s detriment.

This is not to say there aren’t players who could do a sterling job as halfback. Tuimoala Lolohea, Mafoa’aeata Hingano, and Kieran Foran would all excel in the position. However, it would be short-sighted of Kearney to drop Johnson at this stage.

The most recent call for Johnson to be let go came from Laurie Daley. The NSW coach is of the opinion that doing so would shock the player into putting his full focus and dedication into every game he plays.

Daley suggested that approaches that work at improving the game of other players would not necessarily work for Johnson. He added that Kearney should consider either placing Johnson in a different position on the field, or not selecting him for the team at all.

To be fair, Johnson’s talents are not lost on Daley. The coach sang his praises, and said that, of all the Warriors, Johnson was the most influential when the team had possession of the ball.

That said, Daley might want to take a closer look at how he shuffles his own players. The coach has had five different players play flank in four seasons.

In Defence of Johnson

There is no getting around the fact that Johnson does have his issues. The 26-year-old player’s performance is erratic, and he makes more than his fair share of silly mistakes.

In his defence, the fact that Johnson has had a seemingly endless parade of halves partners, coaches, and assistant coaches since 2011 cannot have helped, at least as far as consistency goes.

His playmaking has definitely improved, even if it lacks the shine of players such as Mitchell Pierce, Johnathan Thurston, and Daly Cherry-Evans. There can be little doubt that, of all the current Warriors, Johnson’s playmaking is the best.

That Johnson assisted with 111 tries over 129 games, scored an average of one try for every two games he plays, and was the only Warrior to play in all of last season’s game is also to his credit.

It should also be remembered that the club lost eight games in a row when Johnson was injured two years ago.

He may be erratic and prone to careless mistakes, but Johnson has become the face of the Warriors. Until Foran has got over his injured hamstring, or until Mason Lino and Ata Hingano have achieved first-grade status, Johnson should remain exactly where he is.