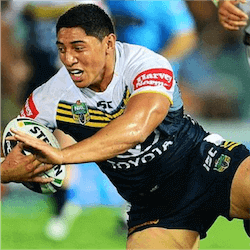 For Jason Taumalolo, the chances of claiming a second Dally M Medal have been severally dashed after he picked up a two-week suspension for an illegal shoulder charge. The Cowboys decided to test out the NRL’s new shoulder charge interpretation with dire results. The result is that Taumalolo will now be ruled out for a full fortnight after being found guilty at the judiciary.

Had Taumalolo accepted the early guilty plea of the illegal hit on Alex Glen, he would have only missed out on a week’s worth of rugby. For now, he has to be content with missing the next two clashes against Gold Coast and Manly. Not only does the suspension stretch the team after Matt Scott was ruled out for the rest of the season, it also means that Taumalolo will be out of the contest for NRL’s highest honour.

According to the rules, any player who is suspended for one week will incur a three-point penalty in the Dally M total count. His two-week suspension means that Taumalolo will be docked six points straight off the bat. This will be a harsh blow for the kiwi back rower who was last year’s joint winner along with Cooper Cronk. Jason Taumalolo started the year in fine form, racking up the maximum three points in his season opening game against Canberra. He added another point after playing a major role in the Cowboy’s big win over the Broncos.

Taumalolo showed excellent skill in the final minutes of the Broncos game. He charged down Anthony Milford’s field goal attempt and then produced two sensational runs to set up Johnathan Thurston for the winning single pointer. Paul Green, the Cowboys coach represented Taumalolo at the judiciary. He argued that Taumalolo had attempted to get his arms around Glen but he just bounced out of the tackle.

According to the judiciary panel consisting of Sean Garlic, Bob Lindner and Tony Puletua, the hit did in fact satisfy the NRL’s new definition of a shoulder charge. The panel found that Taumalolo made no attempt to use his arms to tackle Glen where there was full contact. The new definition comes in the wake of harsh criticism and claims of inconsistencies in the rule. During the NRL’s off-season, the definition of a shoulder charged was completely overhauled, removing any criteria suggesting that the defender’s arm has to be tucked in for the tackle.