Manu Vatuvei returns to NRL for the Warriors 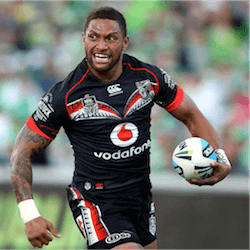 This week Warriors fans have a reason to celebrate. It seems the beast is back. Manu Vatuvei is set to make his appearance for the Warriors in the starting line-up against the Bulldogs in Dunedin. The beast comes in to replace Tui Lolohea who will be shifted to a rather extended interchange bench for the Auckland based team. Friday’s side will look a little different, as Kieran Foran will also be left out due to an injury to his shoulder.

Roger Tuivasa-Sheck will come in as fullback, this despite having picked up a concussion during the match against the Storm that saw the team go down 26 points to 10. The other changes to the side include Bodene Thompson and Jackob Lillyman who will be included into the run on side. This means that Bunty Afoa and Charlie Grub will be shifted to positions on the interchange.

The decision to bring on Manu Vatuvei was generally expected. The beast was always going to be included in the starting line-up at some point. Vatuvei has been a welcoming presence at Mt Smart for the past decade and has seen action under several head coaches. The 31-year-old veteran has 225 games under his belt and offers a forward momentum that can be a complete game changer.

A Strong Wing Combination in Dunedin

At Tuesday’s full contact training, Lolohea was noticeably missing since picking up an injury against the Storm last week. To be fair, Lolohea hasn’t been on point in the first two rounds. He has been struggling with his defence relying on Ken Maumalo to shade his performance. By bringing in Vatuvei into the mix along with Maumalo, the Warriors will have one of the strongest wing combinations in the NRL. However, it should be noted that this same pair were severely exposed in the defeat against the Rabbitohs in 2016.

The inclusion of Thompson also means that the Warriors will have a reunited back row with Mannering, Ryan Hoffman and Thompson joining forces for the first time this year. Mannering will be playing his 261st NRL game equalling the record set by Stacey Jones. The match against the Bulldogs on Friday will be the first NRL competition match to be played in Dunedin. Despite coming off back to back losses against Melbourne and the Sydney Roosters, the Bulldog’s will certainly be the Warriors most challenging opponents in the competition.