NRL Injuries Mount in Round 19 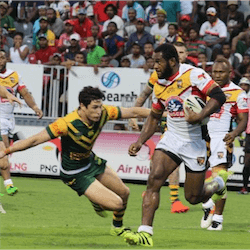 Season In Question For Injured Johnson

Halfback Shaun Johnson received a horrendous knee injury on Friday night that has cast serious doubt on his ability to complete the NRL season. Managing director for the Warriors, Jim Doyle stated that the kiwi player will more than likely not return to the game this season.

Currently the player will be undergoing scans today to see what the extent of his injury is. The scans will be focusing on his ACL.  The Warriors were facing off against Penrith on Friday night. When Penrith attempted a line break, Johnson gave chase for the length of the field before he slowed down, grabbed his knee and collapsed.

He was immediately taken off field. Coach Stephen Kearney suspected a ruptured ACL and if this is the case it will take Johnson out of the running for Rugby League World Cup consideration.

This will be an equally painful blow for the Warriors as they have been attempting to break into the top 8 of the league and without Johnson, their odds are getting slimmer.

Liddle Out For The Season

The Wests Tigers also lost a player to injury the weekend. On Sunday Jacob Liddle, hooker for the Tigers dislocated a shoulder.

The player was only minutes into the game before he had to come off field. Coach Ivan Cleary confirmed that it seems doubtful that Liddle will return this season.

Winterstein Out For One Game

A bit more fortunate was North Queensland player Antonio Winterstein who seems to only be out of one game potentially. The player tore a calf muscle when his side played against South Sydney.

Winterstein came off the field immediately and both he and the coach believes that as long as he rests and keeps weight off his leg, he may be in fighting shape when their next game rolls around.

It has certainly been a hard round for the NRL, it may not bode well for the finals if some of the top talent have been sidelined.