NRL Round 21 Kicks Off The Weekend 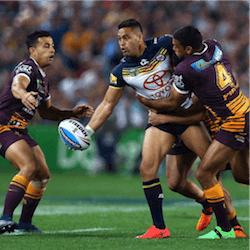 This weekend’s National Rugby League action sees round 21 kicking off the weekend. Check out the upcoming games and the place your bets online at Crownbet, there are great odds and a myriad of markets open for NRL fans.

July 27 – With the team’s individual power and line break records, the Panthers may have the upper hand here. They must win this match to stand a chance in the finals.

The Bulldogs have had a pretty poor scoring run this season; Penrith will have to make extra sure to suppress them to secure the victory.

July 28 – The dominating forwards of the Sharks will prove too much for the Warriors, especially without James Gavet.

The Warriors may gain strength from their home ground advantage but it probably will not be enough.

July 28 – This will be a very evenly matched game. The Eels come of a 4 straight wins high thanks to their tight defence.

Statistically though the Broncos may clinch it as they have scored more points and retained more possession.

July 29 – Fans must be hoping the Knight’s 8 game losing streak will be broken by their home ground advantage.

Chances of that are slim though. The Dragons have it.

July 29 – The Raiders are the favourite in this game but many people are missing the fact that they are without three key players, which will definitely weaken the side.

The Rabbitohs know how to play consistently however and may snatch the victory away from the Raiders.

July 29 – Another very evenly matched game. Both sides are top 4 contenders and both sides have regular team members injured.

If the Rooster’s replacement forwards can stand up and sustain an assault on Queensland, they may stand a better chance at snagging a win here.

July 30 -As their name suggests, Melbourne Storm knows how to pound things into submission without letting up.

The Sea Eagle’s patchy defence may be a serious issue in this game. They cannot rely on their strong attack to try and outscore the Storm.

July 30 – Both teams come off losses, which may be weighing heavy on their minds coming into this match.

The Titans are the favourite for this match but they will have serious problems if they allow the Tigers a single inch. If they can start advancing quickly, the Tigers could score an upset here.