NRL Round 26 This Weekend 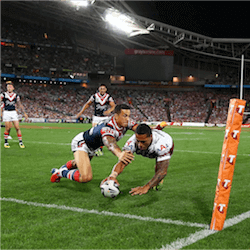 Let’s look at the NRL games scheduled for the first weekend of September so that punters can get a clear idea of who to back when betting online at Sportsbet:

1st September -The Eels have had a fantastic start to the season showing discipline and heart. The Eels will also have Ma’u back on the team, which will help push them forward.

The Rabbitohs have themselves been in fine form, attaining high match scores in their last few games. So far the Eels have lost only one of their matches since round 14.

2nd September – The Titans are by all accounts the underdogs in this match. West Coast has had to send three of their star players for surgery and 5 fresh faces have replaced them.

2nd September – A potential highlight this weekend will be the evenly matched Eagles and Panthers game. Both sides are anxious as this match would mean a top 8 spot for the winner, depending on if the Cowboys and Dragons can power to a win in their meetings.

Bettors are pretty split between the two sides. The Panthers have a proven record of winning games this late in the season when the pressure mounts, with two victories against the Sea Eagles already notched up.

If the Sea Eagles focus on their string kicking game and use the good will that will come from the final game performance of Brett Stewart, Matt Ballin and Steve Matai, we like to think that the Eagles will have an edge in this matchup.

2nd September – There is not much to say about the Storm’s chances in this game. They have not posted a loss yet and their offense is devastatingly on point.

Canberra will need to break down the Storm middle to stand a chance. Most bettors are backing the Storm, which may open a potential for underdog bettors to make a killing. That is if the Storm enters the game at half steam.

3rd September – This will be a comfortable win for the Sharks.

Their defence is simply too tight even with a home ground advantage for the Knights.

3rd September – The Dragons are the favourite in this match but that said, the Bulldogs are backed into a corner and we have often seen them bounce back from losses.

Since their form is too unpredictable, we will back the Dragons as the winners here.