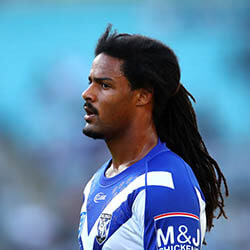 Bulldogs winger Jayden Okunbor says he’s feeling relieved and eager to return to playing great rugby for his team after the franchise elected to not permanently deregister him following the pre-season schoolgirl sex scandal.

Okunbor, who played his first game back since the scandal during Canterbury’s Friday night loss against the Sea Eagles, says he feels true remorse over what had happened, and even blames himself for the Bulldogs’ poor start to the season as well as a $2 million club sponsorship loss. He says he’s now more keen than ever before to repay the franchise’s faith invested in him and to rebuild his tarnished reputation.

Jayden Okunbor and former Canterbury teammate Corey Harawira-Naera were given the NRL boot mere days before the start of this year’s rugby season. This after they admitted to having had consensual sex with schoolgirls whilst staying at the team-hotel in Port Macquarie.

While teammate Harawira-Naera has in the meantime been signed by the Raiders, Okunbor says he only ever wanted to return to play for Canterbury. He also admitted to having during the darkest of days decided for himself not to return to playing league rugby, even if he were to be permitted to return. Even so, said Okunbor, the minute the club said they wanted him to come back, he couldn’t help but jump at the opportunity.

The appeal case that saw both players’ NRL de-registrations uplifted is considered to be the highest-profile legal win in an NRL appeals case to date.