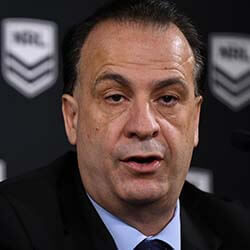 ARLC chairman Peter V’landys has now admitted that leaving NRL players out of the loop in terms of crackdowns implemented on head-high contact was a mistake on his part. V’landys added that now, with the benefit of hindsight, he’s realised that he could have followed a better approach.

V’landys’ apology comes after players from all 16 NRL clubs addressed a joint letter to the league expressing their frustration over the lack of consultation regarding what they consider to be key issues. The letter was drafted after a Zoom meeting between the Rugby League Players’ Association and its player-delegates on Wednesday evening.

V’landys said this week he welcomed the letter and that he remained fully committed to building and maintaining a solid relationship between the NRL’s head office and players, while proclaiming hindsight to be a “valuable tool”.

He furthermore confirmed having attended meetings with both Clint Newton and Daly Cherry-Evans, saying he greatly looked forward to working in close association with them.

V’landys added during his statement that the situation is ironic because of the immense respect players enjoy from the NRL. The crack-down on head-high contact was implemented for the very reason of wanting to protect players from harm and injury, he explained.

Newton commented on Wednesday night’s meeting saying the Zoom meeting was public knowledge and that the everybody involved only had the best interests of players at heart.