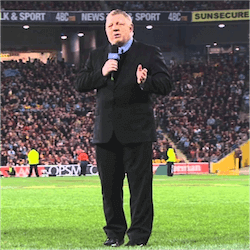 Phil Gould is never one to keep quiet about rugby league matters. In his latest podcast, Six Tackles with Gus, the former Penrith Panthers star was in complete disbelief about the fine slapped on Sam Thaiday following the Bronco’s clash against the Melbourne Storm. Thaiday was officially charged with contrary conduct after he yanked on Jesse Bromwich’s injured thumb last weekend.

According to reports, Storm captain Jesse Bromwich entered the match with an injured thumb, which Thaiday knew about. Thaiday then took the opportunity to target the digit during the match. At first, Thaiday was slapped with a $A1500 fine; but after fighting the charge and losing, an additional $A600 was added to the fine.

On his podcast, Phil Gould said he could honestly not believe it. He said that all now all coaches will have players out there with bandages wrapped around their appendages. According to Gould, they are just mucking around and he doesn’t think this is an issue at all. He went on to ask the question, what if a player has a knee guard or an elbow guard. What if everyone knows the guy had a cracked rib? What would we do then?

Before the 2017 season got underway, the NRL announced that it was introducing a whole new fine system for low-grade offences. This was in an effort to reduce the likelihood of players getting suspended for minor offences from building up demerit points. While Gould welcomed the new system, he was fearful that it would force players to pay out for even the smallest of indiscretions. Now it seems his fear has been realised.

Gould said that the league has downgraded minor incidents to anything that doesn’t look right or anything people complain about on social media. While it may be a sore point, Thaiday’s fine is nothing compared to the amount three NRL clubs had to pay out for breach of concussion protocols this past weekend. For their indiscretions, the St George Illawarra Dragons got slapped with a $A100,000 fine while both the Gold Coast Titans and the Newcastle Knights were each handed a hefty $A150,000 fine.

The seemly bloated fines were handed down as a result of the team failing to follow the strict rules set out when players are suspected of receiving a concussion. Josh Dugan appeared to receive a head knock in the game against the Cronulla Sharks but was allowed to keep paying. For the Titans, the fines came as a result of incidents involving Ryan Simpkins, Joe Greenwood and Kane Elgey.