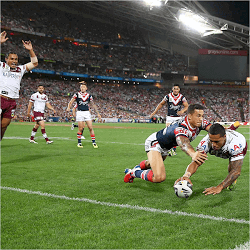 Loss Of Top Back Row Players Concerning For NRL

New Zealand coach Steve Hansen has confirmed reports that the full All Black back row will not be playing in 2017. New Zealand rugby features some of the finest players in the world and international attention is always on them.

The NRL has made a lot of effort in raising money to offer competitive contracts for players but this still is not enough to prevent some players from going to greener pastures.

Rumours abound regarding the future of top players like Ben Smith, Aaron Cruden, Isreal Dagg and Charlie Faumuina. So far only Faumuina has confirmed that he will be going to France in the 2017 season to play in their Top 14 tournament for Toulouse. With regards to Dagg, Cruden and Smith, coach Hansen has stated that New Zealand will be lucky to retain all three players.

One top player that has confirmed his will to stay is Owen Franks. One of the best props the All Blacks has ever had, Franks has resigned his contract with New Zealand and will be representing his country until at least 2019 after the All Black’s World Cup appearance.

Franks has had a fantastic performance in 2016. His combination of power and dexterity essentially secured his future with the All Blacks, at least until 2019.

The player has stated that he want to be his absolute best before deciding on playing for international teams and currently he feels he has a lot more to work on with the All Blacks.

With the potential loss of these players looming, it may be time to look at possible replacements in the New Zealand NRL ranks. Nepo Laulala, Ofa Tu’ungafasi and Jeffery Toomaga-Allen are prime candidates but they are not on the level of the above-mentioned players just yet.

Laulala has only played four tests for New Zealand and missed the whole of the 2016 season due to a knee injury.

He was providing a huge challenge to Owen Franks’ position as top prop until his injury pulled him out of contention.

Tu’ungafasi is still a very green player and has only had 4 appearances with the All Blacks. Toomaga-Allen has been out of the game since the start of the 2016 season thanks to a broken arm.

Fortunately New Zealand has always been great at churning out new talent through training camps, but the loss of the experience and raw inborn talent can be a big problem for the future of the NRL and by extension the All Blacks.