Sharks To Fight For NRL Defence 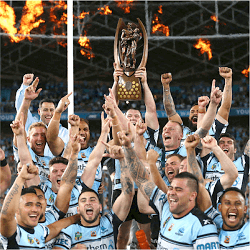 Cronulla And Their NRL Plans

The Cronulla Sharks won an emotional victory in the 2016 NRL final. They faced off against a very defensive Melbourne and fought for a 14 – 12 victory, securing the cup for the team just before their 50th anniversary year.

Captain Paul Gallen closed his victory speech by telling the people of Sutherland Shire in Cronulla to turn off their porch lights because the cup is coming home, a reference to Harold Holt.

This victory has been 49 years in the making, the last time that Cronulla won the NRL finals. Head coach Shane Flanagan believes that he has finally put together a winning team that will form the foundation for the first ever successful premiership defence since Brisbane last defended their title successfully in 1993.

Unfortunately this monumental victory was also met with some sadness for the team and fans alike as it marked the final match of Michael Ennis. This fantastic hooker has now retired after the landmark win.

Currently two players are in strong contention to fill the coveted spot. Jayden Brailey and Daniel Mortimer are in the running to grab the jersey but so far no official word has been given.

Full of steam after their win, Coach Flanagan has stated that they are now just focusing on preparing for their next upcoming games in the World Cup Challenge. They will be facing Wigan in England mid February.

The UK Super League Champions will definitely not be an easy challenge for the Sharks, but a victory here will put them in the [perfect headspace to come back to New Zealand ready to secure their position as one of the top clubs in the NRL.

Fans and players alike were very emotional after the matchup but the coach is looking towards the future and replacing Michael Ennis. Cronulla club owners were upset with the NRL this week after they were denied hosting a game to celebrate their 50th year as a club.

Furthermore team rivalries will make Cronulla a marked club next year. Their two long running rivalries with Manly-Warringah and St George will definitely put the pressure on the Sharks.

They need to stay at the top of their game and in a confident headspace to survive the 2017 season and successfully defend their title next year. The competition they will be facing will be immense but with a young and confident team, it just may be their year again.