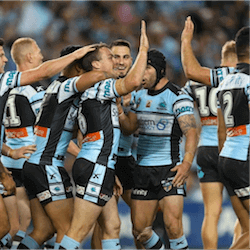 Sharks on Track for Title Defence

The Cronulla Sharks are heading towards a premiership title defence if Sunday’s game is anything to go on. The Sharks claimed their fourth straight NRL win after thumping the Penrith Panthers 28-2 on the weekend. Just one week after Cronulla held out against the Storm in a rematch of the 2016 Grand Final, the Sharks produced another amazing display of hard defence with not a single try going astray.

Their comprehensive victory at the Pepper Stadium means that the Cornella team have retained their top-4 position in the premiership standings. It has been over twenty years since the Sharks produced back-to-back perfect defence games. This includes their incredible 15-game winning streak in 2016. In their game against the Panthers, the Sharks were on form from the get-go. At half time, the visitors were leading 16-2.

In the second half, Jack Bird crashed over the line to extend their lead followed by skipper Paul Gallen in the 60th minute. While the score line might not have shown it, the Panthers actually had plenty of opportunities to get on the scoreboard themselves. Despite their best efforts, their forward momentum was constantly thwarted by the Cronulla team’s unbreakable defence.

No Way Through for the Panthers

By half time, the Panthers had actually forced more errors out of the Sharks and played more time beyond the oppositions 20-meter line. The Sharks however, were more than up to the challenge. Unable to cope with their rushing defensive line, the Panthers just could not find their way through. In contrast, Cronulla had not trouble finding a gap when they did have the ball.

Chad Townsend had a good run, on the field. He grubbered the ball for James Maloney in the 17th minute while Sosaia Feki transferred to a left-side shift for a brilliant try in the 37th minute. Before the Sharks took their hold, Panthers fans were quietly optimistic as returning players Tyrone Peachey and Matt Moylan bolstered the side. But any chance of a comeback was gone after half time when Bird and Gallen taking the game away.

The Sharks had even contributions across the board, however it was fullback Valentine Holmes who stuck out above the rest. He recorded a team best of 166 meters with a 3 tackle busts. The sharks now sit at number 3 on the NRL ladder with the Strom in second place and the Dragons leading the field.