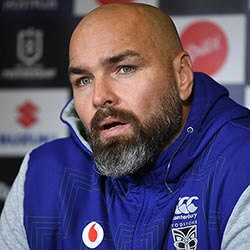 Payten’s frustration vent followed the sin-binning of Warriors player Jazz Tevaga during last weekend’s game against the Eels. Had Tevaga not been sin-binned, the club’s playoffs prospects would not now have been hanging by a threateningly thin threat. And that Payten would feel the way he says he does about the Tevaga debacle is understandable too – especially since NRL head of football Graham Annesley on Monday declared sin-binned Tevaga undeserving of having been ordered off the field.

Had the same thing happened to a Sydney club, said the Warriors coach, a much “bigger deal” would have been made of the incident in the media. Which is precisely why Paten says he gets the distinct feeling that since the unfortunate call had been made at the expense of the Warriors, it also proved a great deal easier to shake off and simply forget.

Though unsure of what a solution to the problem would look like, Payten said he believed a good starting point would be that of holding match officials accountable for the repeated making of mistakes.