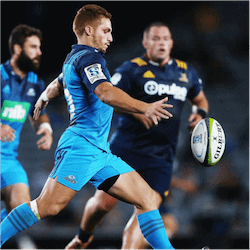 When Super Rugby expanded to 18 teams with the inclusion of Argentina’s Jaguares and Japan’s Sunwolves last year, there was an expectation that rugby union fans might see some embarrassingly big scores from the tournament’s established giants when they played the newbies.

No doubt, New Zealanders are having a little gloat over the result of Thursday night’s 2017 Super Rugby opening match in Melbourne, in which the Blues made the Rebels feel like total newbies, even though they have been a part of the competition since 2009.

Quite simply outclassed by the muscle and skill of the Auckland side, Victoria’s finest went down 56-18 in Melbourne’s AAMI Park. Teenager Rieko Ioane added another stunner to his reputation as legendary-centre-in-the-making, contributing three tries to the Blues’ total of seven.

No Luck on Rebels Side

A few strokes of bad luck didn’t help the Rebels’ cause, either. They were already missing a few top players to injury, like Wallabies stars Sefa Naivalu, Sean McMahon, Toby Smith and James Hanson, plus Marika Koroibete, their new winger lured from the NRL.

During the match, they lost captain Nic Stirzaker to a knock on the head only minutes after he had scored the Rebels’ first try in the seventh minute, and Melbourne fans were dismayed to see winger Jonah Placid carried off with a leg injury in the second half.

Nevertheless, despite two tries and some moments of brilliance, the Rebels have only themselves to blame for their line-out woes and some sloppy execution on attack. The Blues will go on to their next match, against the Chiefs in Waikato next Friday buoyed by a solid opening performance.

There are 20 weeks of gritty Super Rugby action ahead, and there are plenty more high-profile clashes this weekend to keep New Zealand betting fans entertained. The losing 2016 semi-finalists, the Chiefs and the Highlanders, will both have lots to prove at Dunedin on Friday night.

Saturday’s Stormers/Bulls match at Newlands, Cape Town, as well as the Lions/Cheetahs match in Bloemfontein, should also see sparks fly between two sets of traditional rivals in South African rugby.