Warriors Back On Track With 4 Try Win Over Titans 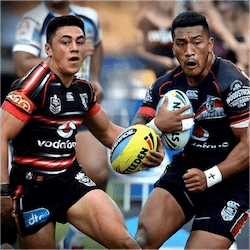 For NRL fans, lingering worries about the performance of the Warriors can now be laid to rest. After an impressive performance in Palmerston North, the Warriors pulled off a sensational win and reclaimed some of their former talent on the field. The Warriors dispatched the Gold Coast Titans 26-6 in a trial game, much to the delight of their dedicated fans. However, coach Stephen Kearney wants to see even more improvement from his team going forward.

Kearney admits that his team is getting better. He was fairly satisfied with their performance in their final preseason game held at the Energy Trust Area. He did however show concern over some missed opportunities on the attacking front. Failing to capitalise on hard attacking phases combined with sloppy defence is still an issue of concern for the team coming off the back of a 30-18 loss against the Melbourne Storm just a week ago.

With the Titans missing key players like Konrad Hurrell, Jarryd Hayne, Dan Sarginson and Kevin Proctor, the Warriors were up against a side that was weakened from the start. Kearney did feel that his team was improving though. With a solid win under their belt, he feels his team has what it takes to carry on their momentum going into their opening season game against Newcastle at Mt Smart Stadium. Speaking to the press, Kearney said that he believed there was a lot of good parts to the Titans game. He also said that there was lots of room for improvement.

The Warriors got off to a good start repelling a strong attack from the visitors. Seizing their own chance for an attack, the Warriors posted two quick tries thanks to the efforts of 18-year old Isaiah Papalii and nimble right wing Tui Lolohea. The Titans were able to hit back with centre John Olive crossing the line to take the score to 10 points to 6 at halftime. Despite a number of chances to extend their lead, the Warriors were just not able to finish off their starting attack phases.

The team did manage to find the line with David Fusitu’a and James Gavet extending their lead into the second half. Vice-Captain Simon Mannering also made his way over the line sealing the win with the final try in the dying minutes.  The team must now focus their effort on bringing their winning tactics and energy to Mt Smart Stadium where they face off against Newcastle on March 5th.