Round Up of the Weekly NRL Games 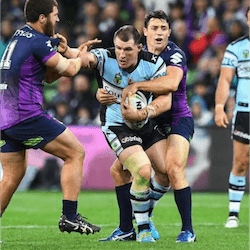 Take a look at a round up of this week’s NRL action and see what’s in store for Rugby fans.

3rd August – The Eels have a 5 game streak and a very impressive win over the Broncos last week giving them a huge amount of momentum heading into the match.

The Bulldogs do not have many more rabbits to pull out this late in the season. Betting odds favour the Eels to win.

4th August – Let us see the Dragon’s last loss as merely a fluke and give them this match. Bettors are predominantly backing the Dragons as well.

They have strong offloads and concede few. The Rabbitohs are a strong team and have historically performed well at the venue, but the Dragon’s form has been consistent this season.

4th August – The precise and consistent attack of the Storm has served them well so far. They are the favourites this match.

The Cowboys will have to play a perfect game simply to stand a chance here.

5th August – The Knights are in great shape, they have the Saifiti brothers and the Warriors lack direction this season.

Bettors are backing the Knights on their home ground for this one.

5th August –   The loss of Andrew McCullough for the Broncos and the harsh defeat they suffered last weekend are the driving forces for the Titans.

They will need these factors in the back of their minds against the Broncos who are the favourite to take this win.

5th August –  The Raiders are coming off a great win last week and they have two key members back in the ranks giving them the confidence they need to be the winners of this matchup.

6th August – The Roosters are the heavily bettor backed favourites and you can put your weight behind them when you bet online at Sportsbet.

The Sea Eagles have had a tough season and despite the two teams being evenly matched, the Roosters have the form and confidence to win.

6th August –  The Panthers have the home ground advantage but bettors are not completely convinced.

The Tigers can manage their middle and keep the ball moving in an attempt to defeat the Panther’s defence, but looking at the error and missed tackle records, this seems unlikely.

Panthers should snatch the victory, although closely.