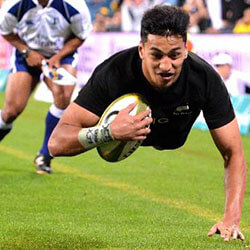 Star winger Rieko Ioane has recently committed to the All Blacks team for another four years, which is being seen as a significant win for New Zealand rugby.

The 21-year-old has scored 18 tries from his last 18 Tests, which includes a double in their latest encounter with the Springboks, and has been the focus of intense offshore club interest, but ultimately decided to remain with his current Super Rugby team, the Blues. His deal is the longest of any of the All Blacks, which will take him to the end of 2022, and is currently thought to be worth around $1 million per season.

While the All Blacks keep the value of their contracts under tight wraps, Ioane’s latest deal is expected to put him alongside captain Kieran Read, Sonny Bill Williams, and World Player of the Year, Beauden Barett. Ioane was aware the World Rugby Breakthrough player of the Year and was a nominee for the main reward in 2017.

His older brother, Akira, is also expected to extend his current New Zealand contract, at least until 2021. The Blues No. 8 has yet to be capped, but played for the All Blacks last November in France. Both brothers were once part of the New Zealand sevens, and both are regarded by Steve Hansen as the country’s premier young players. Hansen has told reporters that he believes both brothers have bright futures in their careers.