All Blacks Beat Italy in Rome 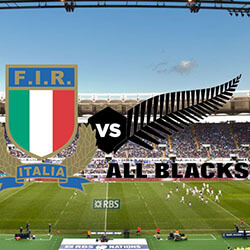 The All Blacks ended their November international series on a more positive note with a 66-3 win against Italy at the Stadio Olimpico in Rome.

The Azzurri were mostly on the receiving end of the backlash from the All Blacks as the guests bounced back from the earlier loss to Ireland. It was an almost completely one-sided affair as the world-champions took 10 tries while they defended successfully against the hosts. Italy’s lack of discipline proved to be their downfall as they conceded too many penalties, which their opponents took advantage of.

Opening exchanges between the teams saw plenty of handling errors, and the All Blacks were guilty of knocking on, but they quickly organised themselves and took their first try by the 8th minute. Their second try came in the 17th minute thanks to Patrick Tuipulotu, who ran a line off to Kieran Read, who slopped the ball to Damian McKenzie.

The half hour mark saw a third try for the All Blacks when Beauden Barrett made a long kick that allowed McKenzie to dot down for his brace. The visitors managed another try before the break, with Beauden Barrett taking advantage of Italy’s slack defence to kick the ball to his brother Jordan, who then finished off the first half with a 31-3 lead.

That pace remained the same for the second half, with the away team ending with a final flourish that saw Jordan Barrett take his fourth try and completed with 66-3.