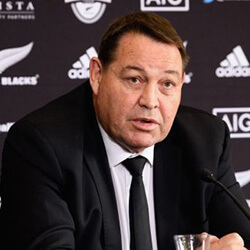 The All Blacks have selected their first played based in Japan to join their newly announced squad of 51 for their upcoming Spring Test tour.

The All Blacks 51-man selection will be the squad set to play against Japan, England, Australia, Italy, and Ireland for the Spring Test matches. Flanker Matt Todd, who is singed in with the Panasonic Wild Knights in Japan’s top domestic competition, has been chosen for the European portion of New Zealand’s tour. He will be taking the now open role previously held by Sam Cane, who is recovering from a fracture to his neck.

Todd will also be returning to New Zealand next year to play for the Crusaders in Super Rugby, but normally the flanker would not be considered for selection into the All Blacks while based in a different country.

The All Blacks have always maintained a policy of not choosing overseas-based players on the basis that it would lead to an exodus of players who would accept contracts in Japan and Europe while still being involved in Tests.

Steve Hansen has said that the 14 Test flanker had been given the exemption due to his long service for New Zealand rugby, and because the player would be returning to the country in 2019. He also announced the squad line-up in two parts in a complex selection process for the five-match tour that they will be participating in over the next few months.