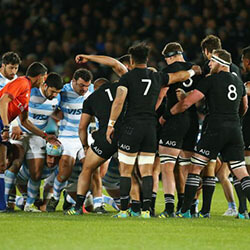 The All Blacks have been preparing to make their way through the crowds of protestors in Buenos Aires over the new few days as citizens take to the streets to denounce austerity measures that have been put in place recently by the government.

Security services had stated that all public gatherings should be avoided at all cost due to the risk of violence within the area.

Management and the players have been assured of their safety by the police force, and the New Zealand embassy has explained that it’s another layer of difficulty for the team. This comes as the All Blacks prepare to respond to their latest defeat against the Springboks by taking on the Pumas at the Estadio Jose Amalfitani.

The protests happen to coincide with a general strike that will mean the All Blacks won’t have access to their usual mode of transport in the form of a large bus as they head to training every day before the start of the vent. They will instead travel in smaller vans that will be accompanied by police motorcycle outriders who will stay up ahead and inform the transportation whether it’s safe to continue.

The All Blacks have travelled with a well-armed police presence in the past, and that it’ll be no different this time. The problem has occurred, as there are currently no bus drivers available as most are engaged in the general strike – but they’re expected to continue training as normal.