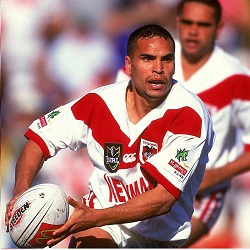 Speaking to the press, Mundine said that if he could get his fitness anywhere up to what it used to be when he was younger, playing league could definitely be an option. According to Anthony, he wants to do things that have never been done before in the sport, he wants to make it possible.

Mundine, who played for the Dragons, quit rugby in 2000 to pursue a career in boxing. Speaking about returning to rugby, Mundine said that it is all about having the right speed, instinct and football experience. Mundine believes he is capable of doing it. He would preferably like to join the Dragons again but he isn’t sure what their plans are until he has had a chat with them.

Right now, Anthony is concentrating training his mind and body. According to him, he is doing all the same training he used to do, but his time he is doing it better. While he has his mind set on returning to rugby league, Mundine will only look at a comeback after he faces off against long-time rival Danny Green. It seems he has not quite hung up his gloves just yet.

In their most recent bout in February, Mundine lost to Green in a controversial points decision. This was more than a decade after Mundine defeated his rival in Sydney back in 2006. After the bout in February, Mundine lodged an appeal with the Australian National Boxing Federation to try and get the result changed. But not it seems the former super-middleweight world champion is keen on settling the score once and for all with a third bout.

Mundine says he has been in training five days a week in the hope of getting back into the ring with Green at the end of the year. He would personally want the fight to happen at the end of the year but it all depends on Danny Green and his schedule. For now, Mundine is confident that he has what it takes to keep going for another five years if he wanted to.