Australia Defeat The Pumas In Canberra 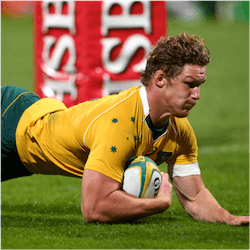 Australia have beaten Argentina and recorded their first win in the Rugby Championship. A try in each half from Israel Folau helped the wallabies to a commendable 45-20 win over the Pumas on the weekend. In their first three matches, Australia recorded two losses against the All Blacks and a 23-23 draw against South African in Perth.

While the Canberra crowd were hopeful for a turnaround, it looked to be another poor performance for Australia as the Pumas were up 13-10 at the end of the first half. But things turned around for the Wallabies in the second half, eventually taking the lead in the 49th minute thanks to a huge try from prop Sekope Kepu. The momentum continued for the Wallabies with Falau, Will Genia, Nick Phipps and Jordan Uelese capping off what ended up being a fairly easy win for the team.

The game got off to an even start with both sides exchanging penalty kicks. The Pumas took the lead after 23 minutes when Martin Landajo spun quickly out of a ruck and found a bit of space across the line. The Wallabies managed to equalise moving the ball from one side of the field to another before Bernard Foley executed a well-timed kick for Folau to do the honours.

Foley was instrumental in the game; contributing 15 points with a 100% kick rate and a try-saving tackle in the second half. The 10-all deadlock was broken just before half time when Argentina’s Nicolas Sanchez booted a penalty kick between the uprights. Speaking to the press, Australian coach Michael Cheika said that he was sorry the first half was a bit slow for the team. The Argentinians scored themselves out and it was a much better game for them in the second half. He went on to say that the reason for the turnaround was mainly due to improved set-piece play.