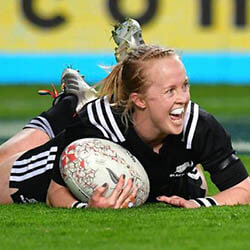 Black Fern and world champion Kendra Cocksedge has credited a focus on mental health as the number one catalyst behind her improved performance on the field. A tough year, said Cocksedge, has made her even stronger than before.

In addition to being a world class rugby player, Cocksedge is also a women’s rugby development manager for New Zealand Rugby – which is basically how she goes about earning her daily bread and butter. All of which meant that the uncertainty caused by the organisation’s recent restructure and the laying off of at least 25 per cent of its workforce created even more personal pressure for the star player. The 32-year-old during Mental Health Awareness week in New Zealand spoke of how she had initially assumed her job to be one of those on the line, and the stress resulting from that worry alongside her having to continue to meet her financial responsibilities.

But since she was fortunate enough to have a gym set up at her home, Cocksedge said she ultimately channeled her stress about the future into keeping physically and mentally fit. Exercise, says the Black Fern, is what ultimately saved the day for her. Exercise and learning how to cope with not always having one’s ducks neatly lined up in a single row.

Staying mentally fit, said Cocksedge, is every bit as important as staying physically fit – a truth she says she only recently experienced first-hand. Which she says has in turn led her to believe in the importance of balance and of putting one’s self first from time to time.