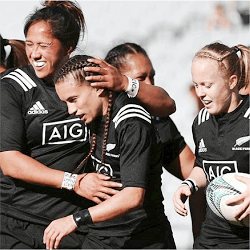 Selica Winiata managed to score not one but two tries as the New Zealand top-ranked women’s rugby team defeated Canada with a score of 20 – 10 during the international women’s rugby game that occurred on Wednesday. The Black Ferns have managed to broaden their winning streak over Canada to a total of 12 games now, and the two teams will meet again come August, in pool play for the Women’s Rugby World Cup to be held in Ireland this time around.

Kendra Cocksedge managed a penalty kick and conversion for the New Zealand Black Ferns team, and Aotearoa Mata’u was able to add a try to the team’s total, which had New Zealand in the lead with a score of 8 – 0 by half-time at the game which was held in Donnybrook Stadium. Donnybrook Stadium is one which belongs to the rugby union, and is located in Dublin, Ireland. The stadium has a crowd-capacity of 6 000.

New Zealand also managed to trounce England by 5 points in Sunday’s match, with a final score of 25 for the winners, and will wrap up their tour this weekend with a match against the Irish.

The History of Women’s Rugby

Rugby union games as played by women is an identical sport to the one enjoyed by male athletes, and the games feature the same rules; indistinguishable pitches; and equal equipment. Its history, however, is vastly different to that of male rugby union matches, due to a number of social pressures, and the character of the rugby union as a whole. These disparities have resulted in a history that is largely been hidden until relatively recently, but the women’s rugby union is slowly gaining a higher profile thanks to the increase in international tournaments for these games, and larger amounts of financial investments.

A more extensive acceptance of women’s rugby has lead to female versions of other major rugby union tournaments, with the female Five Nations having kicked off in 1999, and a growing amount of headlines.