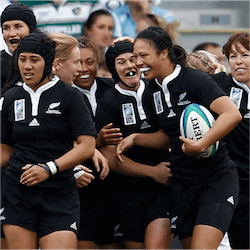 The Black Ferns Sevens team claimed a brilliant Cup Final victory thanks to the late try by Michaela Blyde against Canada in Kitakyushu Japan. This brings their tally to three Cup Final wins in just four events. With another win in the bag, the girls have extended their World Series lead by 10 points over defending champs, Australia.

On the day, it was their fitness and composure, which lead to the New Zealand side overpowering Canada to claim the spoils. Canada had come through day 2 playoffs having seen off the Australians and Russia in a powerful display of skill and dominance. While they lacked the same edge against New Zealand, Canadian player Jen Kish would be heavily disappointed as she scored early on in the game but lost the ball over the line.

Portia Woodman was voted as player of the final after running a massive 60 meter try while Niall Williams scored her fifth for the weekend with a quick opportunistic takedown. Canada led for most of the match and were holding onto their 14-12 lead with the end in sight. This was until Blyde planted the match winner with the help of some brilliant passing from Kelly Brazier and captain Sarah Gross.

Speaking to the press, Portia Woodman said that the Canadian team had been on point all day and they had to work extremely hard to keep them back, even though their lungs were hurting and their legs were spent. The New Zealand team displayed good fighting spirit in Japan. Going up against France on day one, England in the quarterfinal and of the mighty Canadians in the final, it really put the team through their paces.

Australia and Fiji fought it out for the bronze medal with Australia managing to scrape through with a 19-17 victory. The 2016 Rio Olympic Gold winners have not won a single Cup in the Sevens series, leaving rugby fans scratching their heads. The next World Series tournament will take place in Langford Canada on the 27-28th of May. This will be the penultimate tournament in series, with the New Zealand side gunning for the title. There have been rumours though that players such as Woodman and Brazier will not be available, as they will be gearing up the Rugby World Cup.