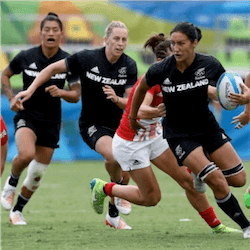 With five rounds of the 2016-17 HSBC World Rugby Sevens Series men’s tournament completed, New Zealand is lying in fourth place on the tournament leaderboard. They were knocked out by Fiji in the semi-finals of Las Vegas Sevens last weekend to finish fourth in the leg, 36 points behind South Africa’s commanding leaderboard tally of 107.

The precarious positioning makes this weekend’s round in Vancouver, and the final four in Hong Kong, Singapore, Paris and London, even more important to New Zealand betting fans. But punters who want to back a national side have an even better prospect for the 2016-17 WR Sevens: the New Zealand women’s team.

The Black Ferns have won the women’s tournament three times out of four since its inception in 2012-13, and they look like they’re on track to add a fourth championship to their record this year.

Top of the Ladder with Two Titles

The women’s competition has only six rounds, with competing teams redistributed through the three pools in each leg. This season’s first three rounds were played in Dubai, Sydney and Las Vegas, and the New Zealand women’s team finished as champions in two of them.

In all three events, the Black Ferns remained undefeated in the pool stages. In the Dubai Sevens, they went on to beat Australia in the final, and the final of the Las Vegas Sevens was a rematch, with the same result. Only in Sydney did they falter, losing the semi-final to the USA, but then beating Australia again in the play-off for third place.

As a result, New Zealand is now in the top spot of the women’s ladder, on 56 points. However, that is only six points ahead of the Aussies, so there is plenty of tension and excitement awaiting punters in the final three rounds of the series: in Japan in April, Canada in May, and France in June.