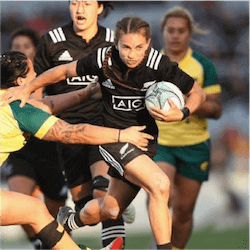 After suffering a home defeat at the hands of the English last month, the New Zealand woman’s rugby team are fully confident about their preparations for the Rugby World Cup which is scheduled to be held in Ireland next Month. Black Ferns coach, Glenn Moore has named a particularly strong squad of 28 women. The squad consists of a 16-12 split with experience, versatility and power being the key factors.

The unprecedented loss to England in Rotorua has galvanised the team with each player focused on a single goal as they seek out their fifth WRWC title. In total, there will be 12 players from the 2014 squad that place fifth in the competition, so a lot of the women have a point to prove. Speaking to the press, Moore said that after the England game, it was clear that the Black Ferns had to work on their accuracy and one-on-one defence.

Another key factor was the discipline in the side. The side copped a total of 4 yellow cards during the series which certainly didn’t help matters. That being said, Moore is confident of the weaponry in his squad and views the England defeat as the kick in the pants they needed to fire up the team. The World Cup squad had a few tight selection calls with Moore calling out Angie Sisifa, Justine Lavea and Pip Love for prop position. Janna Vaughan and Honey Hireme, the two outside backs cut from the June series will also make an appearance.

Back Hazel Tubic will come in as well as the 20-year-old prop Aotearoa ‘Katie’ Mata’u. According to coach Moore, Hazel was in the starting 28 but was carrying and injury through the June series. The Black Ferns side will have a few multi-skilled players, which is essential for a team playing five full games inside of 17 days. Most of the squad will be in action this weekend playing club rugby before assembling in Auckland for a two-day Word Cup camp.

Thereafter, a few of the squad members will play club games on the 22nd of July before the final World Cup Camp at the end of July. The Black Ferns will kick off their World Cup campaign with pool games against Wales, Canada and Hong Kong on the 10th of August.