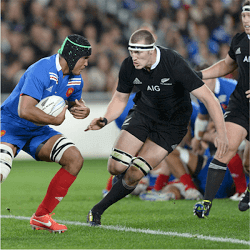 Old France Has Returned According to NZ Coach Steve Hansen

New Zealand’s rugby coach, Steve Hansen, has been quoted as saying that “old France” has made a return after a superb match in Paris on Saturday.

The All Blacks edged the game with 24 – 19, and, although the French team hardly ever looked like they would be able to emerge victoriously, they did play with flair and freedom, and ran the ball whenever they could.

The past few years have been relatively unproductive ones for the French team, and they limped out of the most recent World Cup, having suffered and ignominious defeat by the Kiwis of 62 – 3.

Hansen has said the Test match was a great one, and both teams’ performances were a factor in the crowd’s enjoyment of the game. He went on to state that it felt like the French rugby team of old had returned, especially since they were running the ball every chance they got.

Hansen was very generous in his praise for France’s performance, but did not stint on compliments for New Zealand either, stating that he was “very happy” with the way they had played. He went on to say that they lost more than 800 caps and some real rugby legends after the last World Cup, and he was proud of their performance this year.

He said that for the team to have managed to do what they had done this year, losing just one match and playing extremely good rugby the vast majority of the time, as well as managing to deliver a high standard of playing under the enormous pressure games later in the season placed on players thanks to the fatigue factor, made him very proud.

He pointed out that his team had been around the world not once but twice in a nine-week period, had to deal with nine time-changes for seven of their games, and had done an excellent job as well.

Noves Weighs in on What the November Games Revealed

Noves has stated that this was a good time to assimilate what the November games had made known, with a 52 – 8 win for the game against Samoa contrasting heavily with a 25 – 23 loss in the match against Australia, and then the defeat in the game against New Zealand all needing to be factored in. He mentioned that this information would all need to be taken into account before the preparations for the Six Nations was begun.