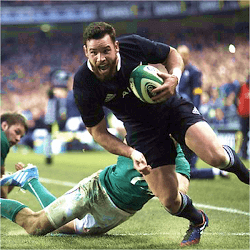 All Blacks Settle the Score and Beat Ireland

Following their shock defeat two weeks ago when playing against Ireland, the All Blacks have recovered their pride somewhat. The New Zealand team beat Ireland 21-9 in Dublin on Saturday, putting paid to those who said that they had lost their touch and that Ireland would find them a walk over the second time around.

When Ireland beat the All Blacks 40-29 in Chicago the whole world stood still, as this was not only an unexpected result, it was also an historical one. Ireland had not beaten the All Blacks in 111 years and when they did, it was at a time when the team looked to be invincible. Sadly, a second Irish win, this time on home soil, was not to be and the Irish succumbed to the power and might the All Blacks are famous for.

Saturdays match wasn’t without upset and it was described by many as a rough game. The All Blacks seemed hell bent on taking revenge on Ireland for ending their 18 match winning streak and played hard and fast, with collisions forcing out Irish starters Jonathan Sexton, CJ Stander and Robbie Henshaw all in the first half.

A number of Irish scoring opportunities were thwarted by the All Blacks and a bruising defence, several last ditch turnovers and a number of disruptive fouls made the game an interesting one to watch. Steve Hansen, the New Zealand coach commented after the match that whilst it wasn’t always pretty, the desired result was achieved and the Kiwis had now answered any questions about their teams character and ability, once and for all.

Action from the Start

The second Ireland – All Backs test clash played out in front of 51,000 roaring fans in a sold out Lansdowne Road Stadium, and everyone was on the edge of their seat right from the first blow of the whistle.

Whereas Ireland had scored 5 tries in Chicago, they didn’t manage a single one this time round, and the All Blacks almost overwhelmed them right at the start, opening the match just 3 minutes in with a try and conversion that took the score to 7-0. A second try saw the All Blacks end the first half leading 14-6, but with 7 penalties under their belts.

The second half saw the Irish team take to the field with renewed vigour, but even this wasn’t enough to beat the Kiwis, and they were defeated a respectable 21-9.

Kieran Read paid homage to the Irish fighting spirit and admitted it was a hulluva tough match, but as Captain of the All Blacks he said he was happy with the result, and their win.