All Blacks Dominate The Springboks With Huge Win 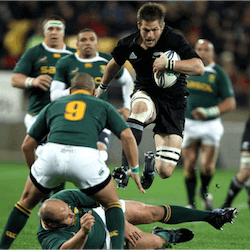 The All Blacks have recorded their highest score margin against South Africa with a massive 57-0 drumming at the North Harbour Stadium on Saturday. This was the second successive test that the All Blacks recorded a 50 plus win over their traditional foes. Last year in Durban, the All Blacks broke records, winning by 57 points to 15.

The New Zealand team were ruthless in their execution of opportunities. In the first half alone, Milner-Skudder, Rieko Loane, Scott Barret and Brodie Retallick all crossed the line to take the score to 31-0 at the break. The second half produced another three tries with Lima Sopoaga, Ofa Tu’ungafasi and Codie Taylor topping off the scoring.

Despite the staggering scorline, the Springboks actually created a number of opportunities with spaced out running lines and kicks into open space. The problem was they were unable to finish anything off as the All Blacks defence was like running into a brick wall. In contrast, New Zealand were spot-on in identifying gaps and took their opportunities regularly throughout the game. In the first half, they scored three long-range tries with Loane, Milner-Skudder and Retallick finding space behind the Springboks defence.

A Tough Pill to Swallow

Coming on as a replacement, Scott Barret also found a gap and crossed the line after a cross kick from his brother send Dane Coles knocking the ball upwards. In the 53th minute, Milner-Skudder got his second try with Tu’ungafas doing the honours 10 minutes later. The final 20 minutes of the game was tough on the South Africans as the All Blacks dominated the field. The Springboks stuck it out and were rewarded with only the tries of Sopoga and Taylor coming through.

This was officially the biggest defeat in South Africa’s history. Previously, the largest margin of defeat suffered by the Springboks was in 2002 against England where they lost 53-3 in Twickenham. Speaking to the press, former south African captain, Jean de Villiers said the team is at a new low. He said that the team never thought that they would come close to losing by the margin suffered in Durban last year. He went on to say that the team were outplayed in every single department.

South Africa need to reground as they aim to take on Australia in Bloemfontein on the 1st of October. Meanwhile the All Blacks will make their way to Buenos Aires to take on the Pumas.